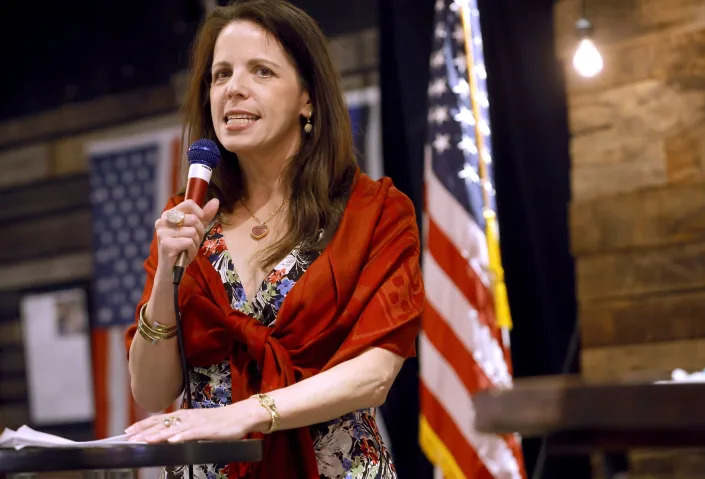 FILE – Dr. Simone Gold speaks to a large crowd inside The Elephant in the Room in Jenks during a Frontline Doctor’s Uncensored Truth Tour event on Wednesday, June 30, 2021.(John Clanton/Tulsa World via AP, File) (ASSOCIATED PRE

A California doctor who is a leading figure in the anti-vaccine movement was sentenced on Thursday to two months in prison for storming the U.S. Capitol, where she delivered speeches to rioters during the mob’s attack.

U.S. District Judge Christopher Cooper in Washington, D.C., also sentenced Dr. Simone Gold to 12 months of supervised release after her 60-day prison term and ordered her to pay a $9,500 fine. She can report to prison at a date to be determined.

Gold, a former emergency room physician, said she deeply regrets entering the Capitol during the riot on Jan. 6, 2021, and didn’t intend to get involved in an event that was “so destructive to our nation.”

“It’s the opposite of who I am,” she told Cooper.

Scroll back up to restore default view.

Gold founded America’s Frontline Doctors. a group known for purveying COVID-19 misinformation. The Beverly Hills-based doctor, a Stanford Law School graduate, has over 480,000 followers on Twitter. She has condemned COVID-19 lockdowns and promoted the use of unproven and potentially dangerous drugs as coronavirus treatments.

The judge told Gold that her anti-vaccine activism wasn’t a factor in her sentencing. Cooper said Gold wasn’t a “casual bystander” on Jan. 6.

The judge also said Gold’s organization has misled supporters into believing her prosecution was politically motivated and trampled on her free speech rights. Cooper called it “unseemly” that America’s Frontline Doctors has invoked the Capitol riot in raising money, including for her salary.

“I think that is a real disservice to the true victims of that day,” he said.

Gold pleaded guilty in March to entering and remaining in a restricted building, a misdemeanor that carries a maximum sentence of one year in prison.

More than 800 people have been charged with federal crimes related to the riot at the Capitol. Over 300 of them have pleaded guilty, mostly to misdemeanors, and nearly 200 have been sentenced.

After the riot, Gold told The Washington Post that she followed a crowd into the Capitol, didn’t witness any violence and didn’t think she was breaking any laws.

“I can certainly speak to the place that I was, and it most emphatically was not a riot,” she said. “Where I was, was incredibly peaceful.”

But prosecutors say she entered the Capitol immediately after a law enforcement officer was assaulted and dragged to the ground in front of her. Gold also joined a mob that was trying to break into the House chamber and later ignored police commands to leave Statuary Hall so she could finish giving a speech, according to prosecutors.

Prosecutors had recommended 90 days of imprisonment, one year of supervised release and 60 hours of community service for Gold.

Gold spent two days in jail after her January 2021 arrest. Her lawyers had requested a sentence of time served and 60 hours of community service. Gold agreed to pay $500 in restitution.

Prosecutors said Gold hasn’t shown remorse or accepted responsibility for her actions. They accused her of trying to profit from her crime, saying America’s Frontline Doctors has raised more than $430,000 through its website for her legal expenses.

“It beggars belief that Gold could have incurred anywhere near $430,000 in costs for her criminal defense: after all, she pleaded guilty — in the face of indisputable, readily identifiable evidence — without filing a single motion,” prosecutors wrote in a court filing.

Defense attorney Dickson Young said Gold has paid her lawyers “out of her own pocket.” Young said America’s Frontline Doctors has kept the donated money for itself.

Gold told the Post that she had traveled to Washington to speak at a “Rally for Health Freedom” on the East side of the Capitol on the afternoon of Jan. 6.

Gold was charged with John Strand, the communications director for America’s Frontline Doctors. Prosecutors also described him as Gold’s boyfriend.

Strand has pleaded not guilty to the charges again him and has a trial scheduled to start on July 18. Prosecutors say Strand rejected their offer for a plea agreement.

Strand was filming as Gold gave a speech in Statuary Hall about her opposition to coronavirus vaccine mandates and government-imposed lockdowns. After police escorted her out of Statuary Hall, Gold delivered another speech in the Rotunda using a bullhorn while standing on a statue of former President Dwight D. Eisenhower.

Gold and Strand spent nearly an hour inside the Capitol before leaving.

The Medical Board of California’s database shows Gold remains licensed to practice medicine in the state. However, Gold’s lawyers say the board sent her a letter threatening to revoke her medical license for “an instance of misinformation."

“My reputation has been utterly shredded,” Gold said Thursday.

Gold moved from California to Naples, Florida, after her arrest. Defense attorney Kira West said Gold has received threats and travels with a bodyguard.